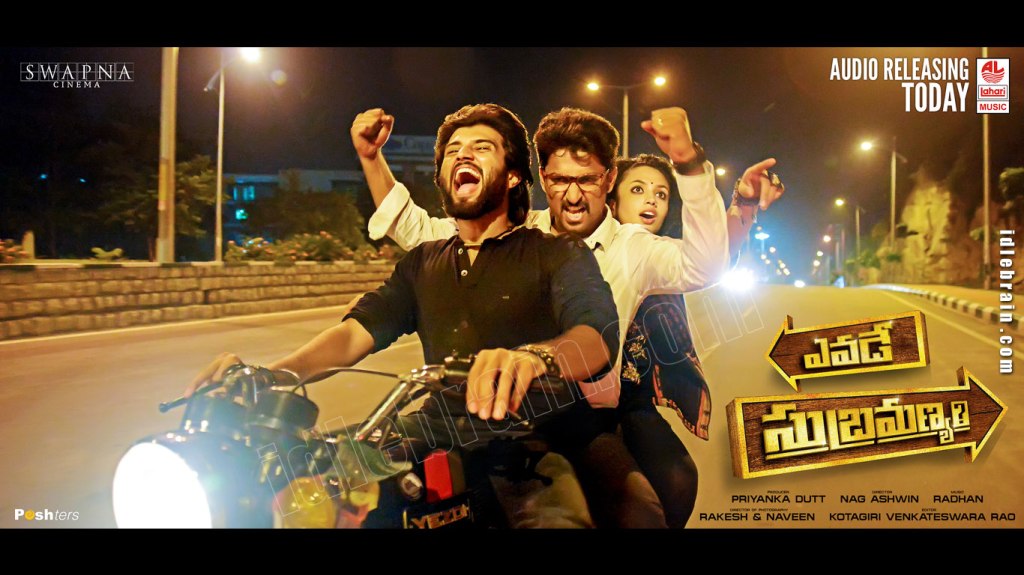 One of the biggest cliché in Indian movies is the ‘coming of age’ story. It probably began with Dil Chahta Hai and continues unabated till today. They normally come in the form of a journey to some place, an experience or a death of someone the protagonist likes or loves. Yevade Subramaniam has all of this and tries its best to not be seen as one of those cliched movies. It works for me, because of a lot of reasons. Primary among them is Nani. He is a gift to Telugu Film Industry. A few years ago while talking about Nani, Rajamouli said that though he comes across as an instinctive actor, there goes a lot of thought behind that. Towards the end of the movie, Nani’s character says that people can realise what they want from life. For him it took a journey to Doodh Kashi to understand, whereas there are a lot of people who realise that by staying where they are. Nani is a lucky actor that he got to enact that scene. It’s not a first for him. He got to do the same in Pilla Zamindar too. When we sit down and think about it we can call it as luck, but to enact two similar kind of scenes and making the audience sway emotionally during both the scenes takes some doing. Nani cracks that.

All through the promotion for the movie, they spoke about how difficult it was for them to shoot in Himalayas. The 40 odd days shoot for the movie was a trip of self realisation for them, they said. Coming from movie actors, you have a chuckle to yourself, because you always feel that they tend to live their life in a bubble. On one of those promotional shows, Nani pleads people to watch the movie on a big screen because of the shoot that was done in the Himalayas. He was right. The place looks brilliant on the screen and full marks to the director and cinematographer for the same.

It is said that the director is the captain of the ship and how the actors perform is a thing entirely upto him. Case in point is Krishnam Raju. We have seen the man in movies like Billa and Rebel in the recent times and feel that the man is making a joke of himself in those movies. Watch him in this movie; He has two scenes, at best, and gives a performance that will be remembered for a long time to come. That he comes across looking so brilliant is because of the director and the dialogue writer.

Vijay Devarakonda, the guy who played the role of Rishi and Malavika Nair, as Anandi, shine in the movie. They look their part and in no sequence does it look like the actors went overboard. Everything in the movie was balanced and a reason for why it’s there. For example, in the first half, there is a sequence where Anandi wants to see the transformation of a caterpillar into a Butterfly and is told that it’s a rare occurrence. She is told by the lepidopterist in question that he himself hasn’t been a witness to one. Towards the end of the movie, Nani sees the transformation and shouts for Anandi. You half-predict that it is to show her the same, but nothing of that sort happens. Pemba, the guy who tries to guide the people on a trip to Doodh Kashi is hilarious and has a bit song for himself in the movie. The way he keeps asking for 100$ a day as his charge is comical. His role is given a proper ending too. Here too, the credit goes to the director because he doesn’t leave any loose ends in the movie.

Regardless of the box office fate of the movie, the director, Nag Ashwin is a huge find for the film industry. Bar Nani and some of the supporting cast, a lot of the faces are unknown people. When you see and sit down to think about the movie, the first thing that strikes you is the amount of thought the director has put in the movie. It’s not natural for me to see a screen filled to the last seat. That it was full for this movie was surprising for me as I have seen quite a few movies of stars going half empty. What must be more gladdening for the makers is the fact a lot of them were glued to the seats till ‘The End’ was flashed on the screen. That definitely was a first for me and talks for the director. It tells us that he had the people watching the movie engrossed.

The dialogue writer for the movie is another person who has to go far. In the age of Trivikram Srinivas, it’s difficult for some other person to make a mark. I hope this man does make a mark. Presence of actor is a different thing and a smashing presence of the same actor is a different thing. It is entirely due to the dialogue writer that we would remember the role played by Krishnam Raju in the movie. In one of the scenes, Krishnam Raju says, “Nenu dabbu sampadhinchatanaki pani cheyatledhu, nenu chessthunna pani ki dabbulu sampadhisthunannu”

When translated it means

I am not working to earn money. I am working and able to make money out of it.

When Nani meets Malavika over an extended period of time, he has a conversation with her.

Nani: Nuvvu edhi padthe adhi chesthavva? ( Do you do anything you want?)

It takes a lot of courage to accept a movie like this when you are having an extended period of trough and not had a release for more than an year. It’s heartening to see Nani accepting the role because he is among the very few actors in the industry who could’ve done justice to this role. Hope he gets to ride the wave and reach the crest.

Nani is brilliant in the movie. He conveys every single emotion brilliantly in the movie. Ruthless person, an opportunist who is willing to wait for his work to be done, a persistent nag, changed person and a good human being- Nani puts across all these traits and convinces everybody watching the movie that he embodied all these traits well

Swapna Dutt needs to be equally commended as the producer of the movie for investing on the movie. If, as I think, she is the daughter of Ashwini Dutt, then it has to be said that the movies produced by his daughters, Priyanka Dutt being the other one, are always shot brilliantly. Baanam, Om Shanti and Sarocharu were their previous productions. This movie can be added to the list easily

Verdict: A good movie that has the capability to take everyone involved with the movie to the next level