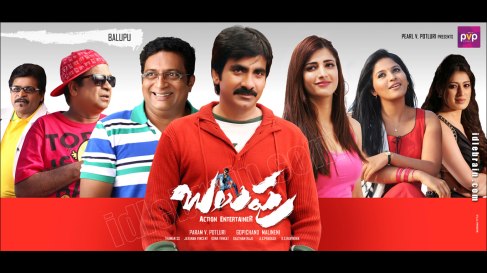 From March 18th, 2011, Ravi Teja doesn’t know what a hit is. In the interim, the movies he has acted in- six- Dongala mutha, Veera, Nippu, Daruvu, Devudu Chesina Manushullu and Sarocharu- sank without a trace. He has acted in Balupu with not a single movie in his kitty. Is he risking his entire career on the result of one movie? Is he confident that the movie would provide with a whiff of fresh air?

What do we do when we fall on bad days? Try to recreate everything that we felt good about in the halcyon days? Ravi Teja does the same. He gets Brahmanandam to enact a full length role and proves that his chemistry with him is the best in the industry. The way he calls him “Pulka” in the movie is a bit jarring at times, but entertaining nevertheless. The scenes involving Shruti Hassan, Ravi Teja and Brahmanandam are among the best comic scenes we have seen in the recent times.

Prakash Raj and Ravi Teja play roles with different shades in the film. In the flashback, they duel with each other and Anjali helps them unite. Others play their parts well in the movie.

Ravi Teja has been reeling with continuous flops from the last couple of years. This film wouldn’t satiate his fans, including me, waiting for a blockbuster. But at the same time, it is a stopper for the horrendous streak that he has been having. He proves, in no unmean terms, that when it comes to comedy he stands second to no one in the industry. His chemistry with Brahmanandam is almost magical. In the interviews as a part of publicity for the movie, he has been stating the same. His imitation of the way Balakrishna delivers public speeches brings the laughs in the theatre. As alluded to previously, it doesn’t bring him back with a bang, but it sure does keep him in contention in the coming days.

Shruthi Hassan combines well with Brahmanandam and does pretty well. She didn’t enough scope to perform in the role given to her. If the movie does set the cash registers ringing, she will be considered a lucky mascot. Her movie with Pawan Kalyan gave a fresh lease of life to him and this movie, in all probability, promises to do the same to Ravi Teja.

Brahmanandam gets a full length role and he delivers. His imitation of the interval fight scene in Iddarammailatho brings the house down. Prakash Raj also performs well in the characters with different shades.

Gopichand Mallineni, the director, is a self-professed Ravi Teja and that shows in every frame. The pressure of resuscitating Ravi Teja’s career could’ve easily shown on the final product, but to his credit, he played to the strengths of Ravi Teja and brings out some fabulous comic scenes. The Jumping Jhapak scene in the climax is one such.

The production values in the movie are good in patches and could certainly have been better, especially in the scenes involving Lakshmi Rai