In the open era(till 2004) 5 Spaniards had won the French Open 6 times. Sergei Bruguera was the only man  who repeated the feat twice. From 2004 on, Rafael Nadal won the French Open 6 times in  7 attempts. No wonder he considers his game to be tailor made for the clay courts. Though he loved clay- which also explains his love for Monte Carlo- it was his dream to win Wimbledon

For a person whose game is entirely based on the power that he generates from his strokes, it is natural to go for every match as though it’s his last. When he lost the 2007 Wimbledon final to Federer, he wept under the shower for close to half an hour. What does the man do? He goes back and trains even harder. His belief in training has been steadfast from childhood

It was Toni Nadal, who made him revere him training with unconventional motivation. That Nadal had a no-nonsense approach towards winning helped Toni. When he saw the effort dipping, he would fire him up with more practice. Nadal remembers clearly that when he lost a match in his early days, he was gutted because he thought that a vacation with friends should have been spent on training instead. In his words “the fun I’d had with my friends during a carefree August could never compensate for the pain I’d felt at losing a match against a player I should have beaten. The pain came from the knowledge that I had given less than my best, that if I’d trained instead of played that August, I would have won my match”. All this was at the age of ten

It became easy for Nadal to win the age tournaments and almost everytime, Toni would put down the achievement. It was Toni who acted as a grounding base for Nadal all his life. Everytime he got onto the court he would see the opponent across the net as an equal who had to be vanquished. According to him, it was not Tennis that attracted him, but the competition associated with it

Members of family and people who know him well attribute his killer instincts on the court to his insecurities off it. They believe that since he found a lot many things that were beyond his control, he sought to put it in order in things that were under his control. It is this yearning for orderliness that makes him draw sips from two bottles at his side on the court, wear his socks at the same level on both legs 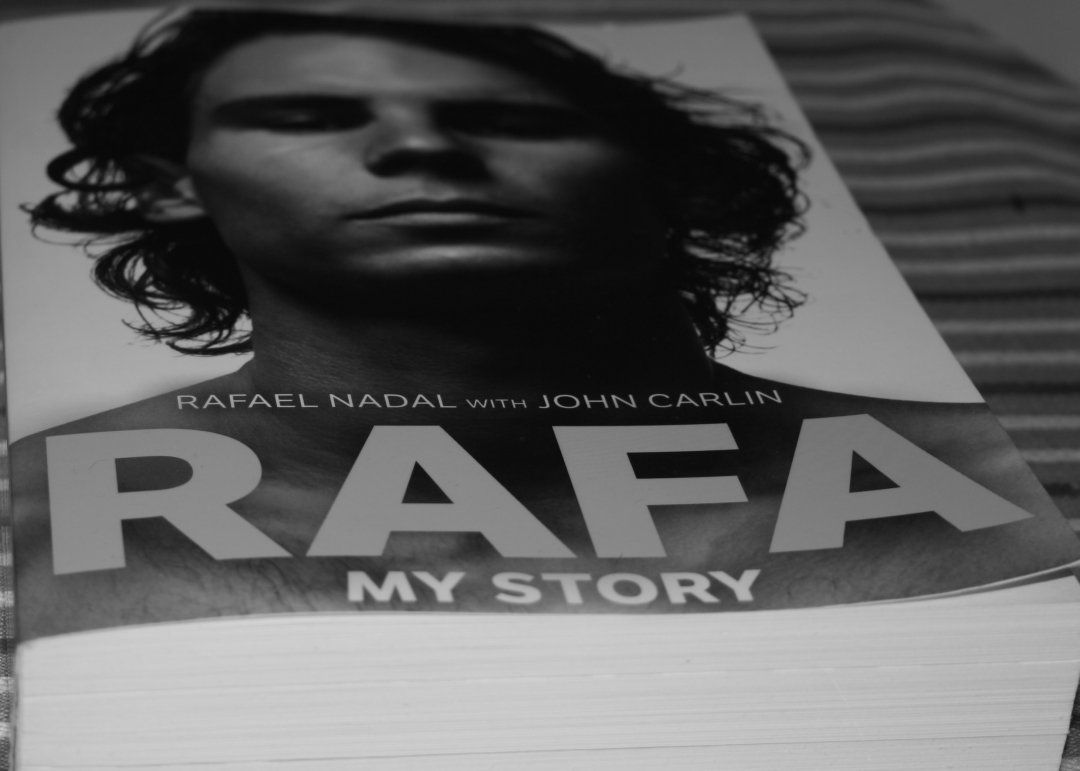 In stark contrast to autobiographies, he actually talks a lot lesser about himself and his choices and concentrates more on how training helped him. Toni mentions in the book that you are special, not because of who you are but because of what you do. It also veers off from  the beaten track in that, Nadal does not criticise his opponents but is full of praise for his two biggest rivals. He could have said a word or two about Berdych and Soderling. He would not have been setting as a precedent as Agassi did it in his book. Instead he sets a precedent by not talking about them

This grace and the ability to take things as they come are also attributed to training. He felt that one had to endure to go to that extra level. Endure did not just mean bearing but it meant stretching oneself beyond the capabilities, taking oneself to the next level

He rates the win highly. Two-thirds of the book is dedicated in how he achieved his childhood dream. He also rates the US Open 2010 final as it helped him in achieving the career grand slam. The narrative in the book almost revolves around these two triumphs

As he started out early in life for the pursuit of glory, there might be a feeling that he missed out on the joys of childhood but he does bring the child out of him as he speaks exuberantly about Davis Cup and Olympics

Final word: This book is not breezy as it goes about monotonously at places. Overall it’s an inspiring tale of a young boy who grew the ranks and went on to feature in debates of the ‘greatest player of all time’